The flurry of activity has intensified since I received funding from the Andrew Mellon Foundation/ACLS and National Endowment for the Humanities Documenting Endangered Languages Program beginning last summer.

In the Fall, Peruvian linguist Liliana Sanchez and I were able to organize a US tour for three Quechua language activists and educators from Peru and Bolivia. They gave panel presentations with us at the International Year of the Indigenous Languages conference in Fort Wayne Indiana, at Boston University, Roxbury Community College and Rutgers University.

I’ve been working with four amazing young people on various aspects of the funded project: verifying transcripts and translations of interviews collected in 2016 and 2018, and carrying out analysis of the Quechua language as it is spoken in the communities around Tarabuco, Bolivia. We have several efforts in process that all lead toward the same goal: to deepen people’s understanding of and appreciation for South Bolivian Quechua and the culture of its speakers. The hope is to return this understanding to communities of science and education as well as to the speakers themselves.

The first way we are doing this is by adding to our archived video collection of narratives Quechua, found at the Archive of the Indigenous Languages of Latin America. This year we are archiving 58 new child interviews with highly valuable native-speaker transcription, translation and analysis, and adding analysis to collections we archived previously so that speakers and scientists can see and hear all of it in perpetuity.

Our second project is to publish articles which include comparison among varieties of Quechua, particular ways of telling stories, and accounts of how the language is changing in different regions. Like archiving, this process takes time to go live, but we hope you’ll see results this later year! These can all be accessed through our publications page.

Our third project is to return to Bolivia to work face to face with community members and bring back DVDs and literacy activities based on speakers’ own words. Since the political situation has made travel uncertain for the immediate future, I have been focusing on remote collaboration and mentoring. Part of this mentoring is to assist native speakers in Bolivia to advance in phases of their own graduate studies. In June and July of this year I will be privileged to teach a practicum on South Bolivian Quechua at the Institute on Collaborative Language Research to be held at the University of Montana. Joining me will be mentees  Gaby Vargas Melgarejo and Carlos Flores Quispe, key Bolivian members of our transcription and analysis team who are poised to continue their studies of linguistics in the US.

Other team members include stellar linguist and statistics whiz/data manager Jon Geary, who studied field methods with a focus on Quechua when I taught it at Boston College, and phonetics acquisition expert Stephanie Antetomaso, who has been studying both Bolivian and Ecuadorian Quechua/kichwa.

It’s such an honor to do this work together and to learn from each other.

I’m thrilled to announce that our latest Quechua storytelling collection has gone live at the AILLA (Archive of the Indigenous Languages of Latin America) and can be streamed from anywhere in the world. Best of all, these videos will be preserved for future generations, unlike those posted on social media. They are published with information on how they were created, and under a Creative Commons license, they remain the intellectual property of the interviewees and not just those who recorded them and participated in transcription/translation. Here they are…

Please note that in the case of children, community members agreed that all interviews should remain protected from public view until they turn 18. 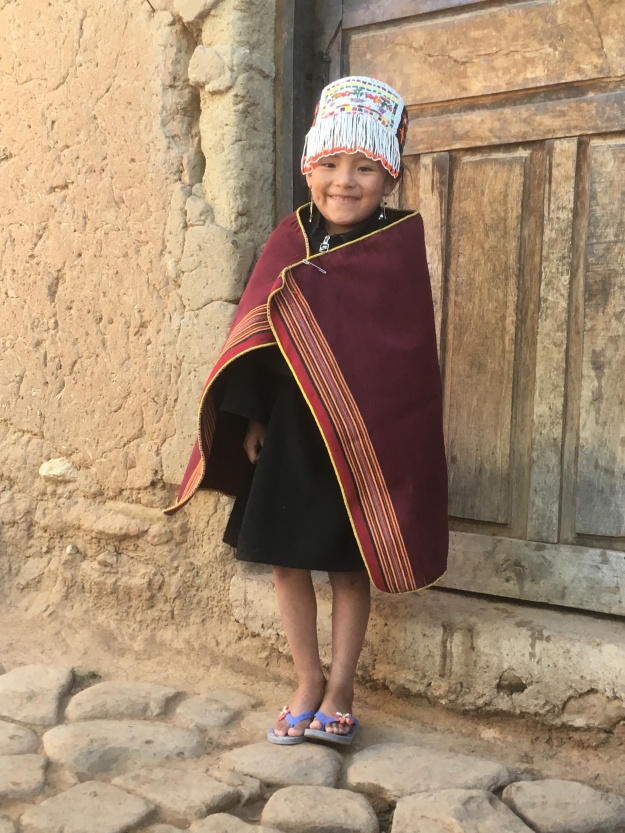 Tahirih Sharaf Challhua Limachi poses in traditional dress before participating in a storytelling interview to record the speech of children from rural Chuquisaca, Bolivia. Chuquisaca is known for some of the finest and most well-preserved weaving techniques in the former Inca empire. Imagine our surprise to discover that Tahirih’s first two names mean “pure honor” in Persian – a language you might not expect to hear in a remote South American farming community. Over half of this Quechua speaking community has embraced the Bahá’í faith, and several people explained that they were attracted to its teachings celebrating unity in diversity, supporting the mother tongue and native culture. Tahirih and her mother gave us permission to post this photo on our website and at the Archive of the Indigenous Languages of Latin America, where we will start adding over sixty new storytelling videos later this year.

Even as we were excited to meet children who speak Quechua at home, we were dismayed to discover that more and more of their parents are opting to speak Spanish to them rather than Quechua. Many families have already migrated to towns and cities where they hope for access to a better education (and to desperately needed water.) Our hope for a better future goes with these families, but we regret the difficult choice they’re forced to make, sacrificing the language that forms a part of their identity. As more and more families make this choice, the language itself will be harder to recover. “UNESCO’s Language Vitality and Endangerment framework … establishes six degrees of vitality/endangerment based on nine factors. Of these factors, the most salient is that of intergenerational transmission.”

This is one reason we find it so important to record people of all ages as they speak Quechua today. We’re truly creating a time capsule for tomorrow, in addition to giving Quechua speech a place in today’s international research on child language.

Residents of communities around Tarabuco, Bolivia, tell stories in their native language to assist with the creation of a grammar and curriculum materials in their language.